To Read the opening speeches.

Over 50 Speakers for the Symposium. List of Paper Presenters and topics are now on this site.

The following speeches may be read on this site:

Premier Ebrahim Rasool “This [Symposium] is an initiative that I want to be associated with”. 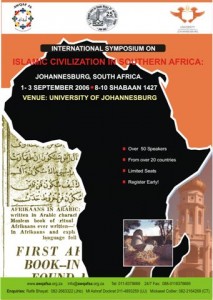 Islam as a religion and as a civilization has had a major impact on Africa since its founding approximately 1426 years ago. More than 60% of Africa are Muslim and several Islamic civilizations flourished in North, West, East, and Southern Africa. The SADC region has several pockets of small and large Muslim populations and is a region where Islam thrived, though under difficult circumstances, for centuries and made significant contributions in all spheres of life.

The OIC Research Centre for Islamic History, Art and Culture (IRCICA) , a subsidiary organization of the Organization of Islamic Conference (OIC) together with the National Awqaf Foundation of South Africa (AWQAF SA) and the University of Johannesburg (UJ) will host an “International Symposium on Islamic civilization in Southern Africa” during 1-3 September, 2006, at the UJ campus, in Johannesburg

AIMS OF THE SYMPOSIUM:

IRCICA is an international institution for research, publishing, documentation, and information dissemination and preservation. Its main areas of interest include the history of Muslim Muslim nations, the arts and sciences in Islamic societies, and above all, Islamic culture and civilization.

The main objective of IRCICA is to study and promote Islamic culture and civilization throughout the world. It acts as catalyst for research, cooperation and mutual understanding not only among Muslims around the world but also between Islam and other cultures and civilizations. IRCICA has held several symposia focusing on different regions of the Muslim world including the Balkans, Central Asia, and Africa. The Symposium in South Africa is the first of its kind and also the first major activity of IRCICA in the region. For details about the centre, its library, and archives and publications, please visit the website: www.ircica.org

AWQAF SA is a South African registered community based trust that was established to popularise the prophetic waqf system and mobilise waqf funds; mobilise and engage human resources; and, to initiate and/or contribute to a variety of worthwhile sustainable community development and poverty alleviation projects and programmes. AWQAF SA initiated and coordinated the Bicentennial Commemoration of the Unbanning of Islam and Religious Freedom in SA during 2004 in which several communities, schools, and madressahs – countrywide participated. For more information about Awqaf SA and its projects and programmes please visit the website: awqafsa.org.za

THE UNIVERSITY OF JOHANNESBURG (UJ)is one of the largest contact universities in South Africa. This mega institution boasts five campuses in the Central Gauteng region and accommodates more than 40 000 students, registered for a wide and diverse range of academic and vocational programmes that are spread across its nine faculties. This institution of higher education serves the education, training and research needs of the new millennium – not only of the region, important enough as they may be, but also of the nation and of the international community beyond our borders, in Africa and beyond. The UJ is committed to improving the quality of life of all the people it touches, including society at large, by establishing and maintaining a culture of lifelong learning while also providing teaching and learning opportunities that will empower people.

The university offers courses on Islam at undergraduate and post graduate levels.

Awqaf in Southern Africa (Proposed as special track of the Symposium)

Side programmes will include: