Awqaf of the Holy Prophet and his Noble Sahabah Book

November 4, 2019 Comments Off on Awqaf of the Holy Prophet and his Noble Sahabah Book 103 Views

The historic first translation into English by Awqaf SA of the Awqaf of the Holy Prophet (S) and some of his Noble Sahabah, a Juristic, Historical and Documented Study By Dr ʿAbd Allah bin Muḥammad bin Saʿd al-Ḥujailī Translated by Prof Yousuf Dadoo Waqf is one of the most vital instruments for social stability and transformation, yet it is probably the least understood of all Islamic practices. This is not made easier by the fact that there are no substantial texts on waqf available in the English language…particularly such a detailed description of the Awqaf of the Prophet (S) and his Sahaba (R). For the first time, Awqaf SA presents an accessible, readable and easily understandable basic text on waqf. Emanating from Madinah, waqf rose to underpin one of the world’s greatest civilisations. In this book, we are taken step-by-step through the history and the underlying juristic aspects of waqf. Pre-order your copy now: http://bit.ly/AwqafSAW

END_OF_DOCUMENT_TOKEN_TO_BE_REPLACED

Fatima al-Fihri, who was born in Tunisia, she came from a well-educated family. In the early 9th century, Fatima migrated with her father and sister from Qayrawan in Tunisia to Fez in Morocco. Upon the death of her father, Fatima inherited a large fortune. Fatima al-Fihri used this wealth to establish the first university in 859 in the 9th century. Ibn Khaldun the famous historian was an alumni at this university. The university still exists today, offering Islamic Studies, Legal Sciences and Comparative Jurisprudence, which subsequently became one of the leading spiritual and educational centers of the historic Muslim world. It is the oldest continually operating educational institution in the world and is sometimes referred to as the world’s oldest university, by being the first institution to award degrees indicative of different levels of study. The mosque is also still in operation, and is one of the largest in North Africa. Ustadha Zaynab Ansari in the Muslimah Media series talks about Fatima al-Fihri who established the first University of Al Quaraouiyine in Fez, Morocco In this video: Great Muslim Women: Fatima al-Fihriyya Founder of the First University in the World (Qarawiyyin) Mufti Abdur-Rahman ibn Yusuf Mangera speaks in details about the contribution made by Fatima al-Fihri to Islamic Education.

END_OF_DOCUMENT_TOKEN_TO_BE_REPLACED

What is Apartheid? Apartheid was a system of institutionalised racial segregation and discrimination that existed in South Africa from 1948 until the early 1990s. The system was based on white supremacy and the repression of the black majority (Africans, coloureds and Asian South Africans) for the benefit of the politically and economically dominant Afrikaner minority and other whites. Apartheid legislation itself was repealed in 1991,and a non-racial government was established following national elections in 1994. Apartheid Story Submission Send us your stories about life in Apartheid times. Relate an incident or the general feeling of living in the oppressive regime. Include the following: Name & Surname of storyteller Area lived in at the time Attach pictures & videos if available Max 1000 words Submit your stories to apartheidstories@awqafsa.org.za Submission period: 16 April 2018 – 16 June 2018 Follow us on the following social media platforms for updates: Instagram @awqafsa Facebook /awqafsasouthafrica Enquiries Fatima Kazee Tel: +27 72 400 4200 Email: apartheidstories@awqafsa.org.za Visit: awqafsa.org.za for more information Flyer

END_OF_DOCUMENT_TOKEN_TO_BE_REPLACED 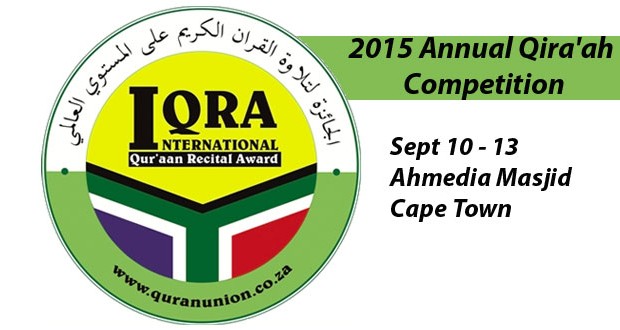 The South African Qur`aan Union, with its experience in hosting provincial and national competitions since 2005, has embarked on the landmark initiative to create the International Qur`aan Recital Award (IQRA) in an attempt to honour the efforts of students and teachers of the Holy Qur`aan throughout the world. The event serves as an added encouragement for individuals to improve, and hence the aim of the competition is to promote and maintain high levels of Qur`anic learning and service, as well as to train and earmark successful (local) candidates for other international platforms. Apart from including reciters from other countries, the event also features a female contest, and a special section for past winners (champs of champs` category). Other than the recital contests, the event also features the `Servant of the Holy Qur`aan Award` where an individual is honoured for his/ her role in propagating the Qur`aan in South Africa. The entire event, which will be video streamed throughout the world on www.livestream.com/channel4sa, is to take place from 10 to 13 September 2015 at Ahmedi Masjid, Grassy Park, Cape Town. Awqaf SA has been a supporter of this event since inception and is instrumental in establishing the Gauteng Chapter of  the Qira’ah  Competition along with the SA Qur’aan Union.