The waqf is a system that stems from the idea of institutionalizing voluntary giving in order to guarantee sustainability.

“Of the good deeds of a person who dies, the following continue after his/her death: teaching knowledge, irrigating land, digging a well, planting fruit trees, building a mosque, leaving behind a Qur’an they have copied out, and bringing up a child who prays for forgiveness for his/her parents.”

Hadith of the Prophet (s), recorded in the Sahih of Bukhari and on the mimbar of the mosque in the waqf complex founded in 1228-1231 by Ahmed Shah and Turan Melek in Turkey.

Waqf: (Pl: Awqaf/waqfs) Literally waqf means to stop, contain, or to preserve. In shari’ah, a Waqf is a voluntary, permanent, irrevocable dedication of a portion of ones wealth – in cash or kind – to Allah.  (Also referred to as Sadaqah Jariyyah — perpetual charity).   Once an asset is a  waqf, it never gets gifted, inherited, or sold. It belongs to Allah and the corpus of the waqf always remains intact. The fruits or usufruct of the waqf may be utilised for any shari’ah compliant purpose in perpetuity, forever. Your eternal fountain of reward / thawaab. A real blessing from Allah.

“Ibn ‘Umar reported: ‘Umar acquired land in Khaibar. He came to Allah’s Apostle (saw) and sought his advice in regard to it. He said: “Allah’s Messenger, I have acquired land in Khaibar. I have never acquired more valuable for me than this, so what do you command I do with it? Thereupon the Prophet (saw) said: If you like, you may keep the corpus intact and give its produce as Sadaqah. So ‘Umar gave it as Sadaqah declaring that the property must not be sold or inherited or given away as a gift. And ‘Umar devoted it to the poor, to the nearest of kin, to the emancipation of slaves, to wayfarers/guests, and in the way of Allah.- Sahih Muslim

The above hadith set the precedent for our honorable Sahaba (r) and Muslims from all walks of life, over the centuries, to popularise the waqf system for any imaginable shari’ah compliant purpose. This command of the Prophet (s) and the action of ‘Umar (r) set into motion the first Social Development Waqf by means of an income producing economic asset.

Examples
Land & Buildings: Cash is provided by one or more persons as waqf to purchase land and buildings, e.g. a small shopping complex. Once the complex is purchased, the property may be classified as a waqf property and waqf rules apply. The property may not be sold (except to replace), be gifted, or inherited. The property remains intact and may not be spent. The rental income that is produced by the complex may be used for any shari’ah compliant purpose.

Explanation
A Waqf is your Capital Gift or Benevolent Loan to Allah in the form of a charitable endowment. 100% of your donation is invested in an income producing capital asset, remains intact, and is never spent for any expense. Only the income generated ie rental or profits from the capital investment is utilised for funding sustainable community and social development projects or programmes. As a donor (waqif/a) you may designate the project or programme, or you may leave it to the discretion of your Mutawallees to spend on a need or priority basis. Beneficiaries may be Muslim as well as the poor in the broader community. Of course, waqfs may take the form of masjids, schools, clinics, and other socio-religious assets.

Awqaf SA focuses on investments in income producing economic assets. A Waqf may be made by any sane adult male or female and with any amount – not only by the rich and famous, but one and all – irrespective of social or economic background – according to means.

a Sacred Voluntary Charity…
a Sustainable Development Institution…
a Sadaqah Jariyyah… a Capital Gift to Allah…
a Legacy for the Future… a Revival of the Sunnah…
a Beautiful Loan to Allah… a Social Responsibility Investment… a Dedication to Allah… an ibadat..
a Civil Society Initiative… an Enduring Endowment…
a Contribution to Nation-building, Poverty Alleviation,
and Community Empowerment…
Beneficial to Muslim, Poor, and Disadvantaged Communities…
…Your Eternal Fountain of Generosity, Benevolence, and Reward. 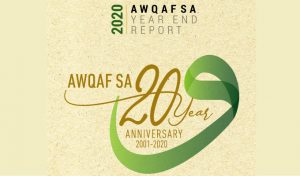